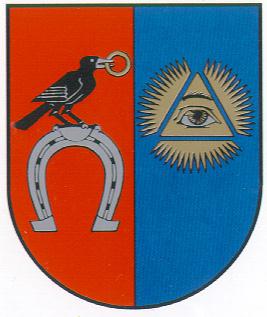 The arms were granted on November 10, 1791 by Stanislaus Augustus, King of Poland and Lithuania, at the same time as the city rights. The original document still exists.

The meaning of the bird with the ring and the horseshoe is not known. They may have been derived from the arms of local noble families. It is officially a Night Heron (Nycticorax nycticorax). The Eye of Providence was the symbol of the so-called Four-year Parliament (1788-1792). The city received its arms during this period. The symbol was used to indicate that all actions of the Parliament were watched (and sanctioned) by God.