From Heraldry of the World
Your site history : Bank of New South Wales
Jump to navigation Jump to search 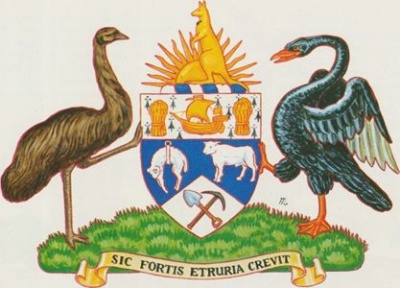 Arms : Per chevron Azure and Argent, in chief a Fleece and Bull statant of the last, in base a Miner's Pick and Shovel in saltire the heads upwards proper, on a Chief Ermine between two Garbs an ancient Ship with one mast, Sail hoisted, Pennon and Flag flying, all Or.
Crest : On a Wreath of the Colours in front of a Sun rising a Kangaroo Or.
Supporters : On a Compartment Vert to the dexter an Emu proper, to the sinister a Swan wings addorsed and inverted Sable the tip Feathers Argent, beaked and legged Gules.
Motto: 'Sic Fortis Etruria Crevit'

The arms were officially granted on February 25, 1931.

The charges in the Shield are symbolical of both Australia and New Zealand-the fleece, bull, and miner's pick and shovel of primary industries, with the sailing ship representing the transporta­tion of produce to overseas markets.

The kangaroo in the Crest and one of the Supporters, the black swan, which alludes to the amalgamation with the Western Australian Bank, are typically Australian; the emu, although Australian, is typical also of certain important sections of the bird life of New Zealand.

The rising sun in the Crest alludes to the eastward position of Australia, New Zealand, and islands of the Pacific.

The motto, from line 533 of the second book of Virgil's Georgics, occurs in a passage describing the steady work, stability, strength, and plenty of a prosperous rural community.