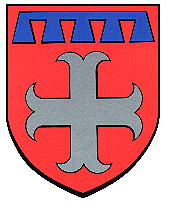 The arms are identical to the arms of Raoul of Sterpenich, who was Lord of Bascharage in the 13th century as a vassal of count Henry V of Luxembourg.