From Heraldry of the World
Your site history : Bastendorf
Jump to navigation Jump to search 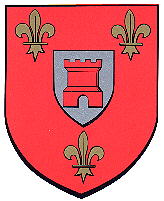 The arms are a combination of the old arms of Vianden (red with a silver escutcheon), Diekirch (tower) and the arms of the family Landscheid (fleur-de-lis). The village belonged to the area of Diekirch, but the oldest Lords of Bastendorf were descendents of the counts of Vianden. The Landscheid family also played an important role in the history of the village.