From Heraldry of the World
Your site history : Biberach (kreis)
Jump to navigation Jump to search 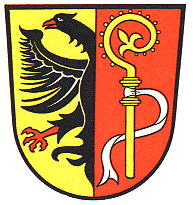 The Imperial eagle is derived from the arms of the city of Biberach, and symbolises the city as well as a number of former Imperial Estates in the district. The crosier is a symbol for the many possessions of some monasteries, such as the Salem Abbey, in the district prior to 1803.