From Heraldry of the World
Your site history : Biwer
Jump to navigation Jump to search 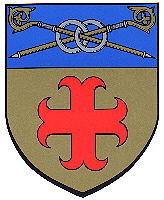 The lower part of the arms show the cross of the arms of the Lords of Berbourg, who, since the 11th century, ruled most of the present municipality.

The upper part shows two crossed crosiers as a symbol for the Abbey of Echternach, who ruled the territory before the Lords of Berbourg, and the abbey of St. Maxim in Trier (Germany) that ruled the village of Hagelsdorf.

The two rings are taken from the arms of the Wecker family, who were Lords of Donven in the municipality before 1700. The combination of rings and crosiers indicates that the three parts are now strongly bond together.