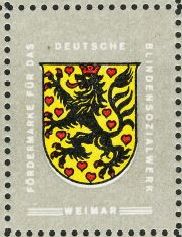 Stamps issued by the German association of the blind to raise money for the association.

I have no idea how many sheets and stamps were actually issued, some examples are shown below.

For all known sheets see here.

Some examples of sheets: