From Heraldry of the World
Your site history : Bolton
Jump to navigation Jump to search 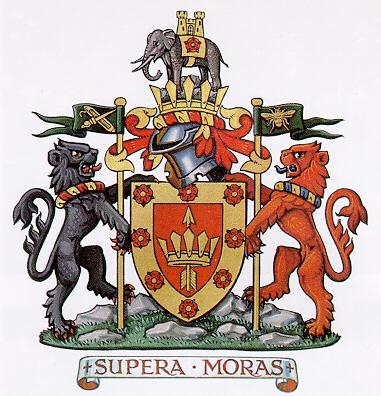 Arms : Gules an Arrow point upwards enfiled by a Crown palisado Or all within a Bordure Or charged with eight Roses of the first barbed and seeded proper.
Crest : On a Wreath of the Colours out of a Crown palisado Or a Rocky Moor thereon an Elephant statant proper on its back a Port between two Towers the trappings Or and charged with a Rose as in the Arms.
Supporters : On either side a Lion that on the dexter Sable gorged with a Wreath Or and Gules that on the sinister Gules gorged with a Wreath Or and Azure each supporting a Staff Or flying therefrom a forked Pennon Vert that on the dexter charged with a Shuttle in bend surmounted of a Spindle in bend sinister that on the sinister with a Hornet volant all Or.
Motto: 'SUPERA MORAS' - Overcome delays

The gold arrow and crown palisade, form a rebus or visual pun with the arrow or "bolt" and the crown representing a "tun" (a settlement within a stockade which is the meaning of the second syllable of the name), thus Bolton. The border of eight red roses on gold to represents eight Lancashire local authorities. The shield shows, therefore, eight Lancashire local authorities joining to form Bolton.

The elephant and castle are based on the former crest of the County Borough of Bolton (see below) with a red rose on gold trappings for Lancashire. The crown palisade as in the shield has eight points (three are hidden) to represent the eight constituent areas.

The black lion is also taken from the former Bolton arms. Differenced by having round its neck a wreath of gold and red, the colours of the former Bolton arms. The red lion, derived from that of the Borough of Farnworth , represents the Hulton family of Farnworth but was changed to blue to match the rest of Farnworth's arms and is here returned to its true colour. About its neck is a wreath of gold and blue, the colours of Farnworth's arms. The pennon bearing the spindle and shuttle represents the textile industry and the other bears a hornet for the paper industry. 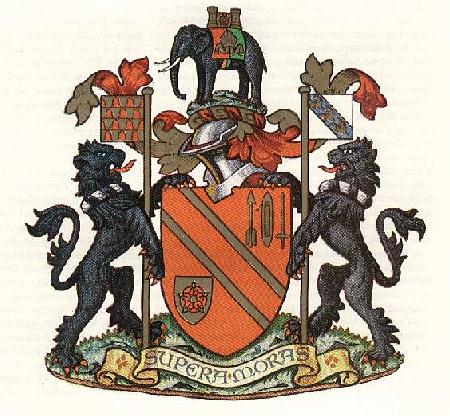 Arms : Gules two Bendlets Or a Shuttle with weft pendent between an Arrow point upwards and a Mule Spinning Spindle in chief palewise all of the last and an escutcheon in base of the second thereon a Rose of the first barbed and seeded proper.
Crest : Upon a Rocky Moor an Elephant statant proper on its back a Castle Or and thereon a Rose as in the Arms the trapping per pale Gules and Vert and charged with a Mitre also Or.
Supporters : On either side a Lion Sable gorged with a Wreath Argent and Sable each supporting a Staff Or flying therefrom a Banner that on the dexter Vair Or and Gules that on the sinister Argent on a Bend Azure three Stags' Heads caboshed Or.
Motto: 'SUPERA MORAS' - Overcome delays

The two bends, symbolising a soldier's shoulder belt, and the arrow are symbols for the famous archers of Bolton. The shuttle stands for the weaving industry and the spindle commemorates the invention of the mule by Samual Crompton, a native of Bolton.

The small shield shows the rose of Lancaster.

The elephant is derived from the arms of Coventry, and recalls that Bolton historically belonged to the diocese of Mercia, of which Coventry was the seat. The saddle of the elephant shows a mitre for the bishops. The elephant stands on moorland to suggest the towns old name "Bolton-super-Moras" or "Bolton on the Moors".

The two black lions are derived from the arms of Flanders (Vlaanderen). Most of the workers in the weaving industry in late medieval times were originally from Vlaanderen, and were of great importance for the development of the city.

Like the crest the motto "Supera Moras" refers to the town's old name.

Literature : image send to me by mail.