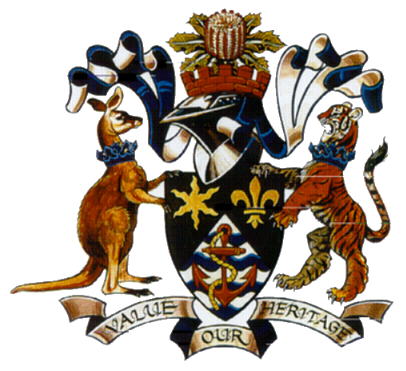 The anchor and wavy lines refer to Botany Bay, so named by Captain James Cook, after the expedition's botanist, Sir Joseph Banks, discovered so many new botanical species there in 1770. One was named 'banksia' in his honour, and the fleur de lis in the arms come from Banks' family arms.

The estoile is derived from the arms granted posthumously to Captain Cook.
The kangaroo represents Australia, while the Bengal tiger is a reminder that Australia's first zoo was located at Botany.
The astral coronet alludes to Sydney's international airport, within the city at Mascot.

The mural crown, a conventional symbol of local government, is a reminder of the key role Botany played in the development of Australia as a nation.