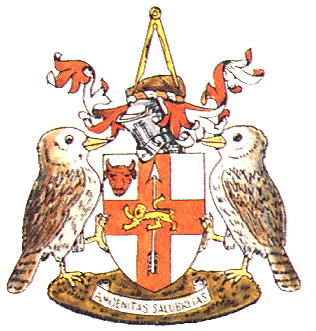 Arms : Argent, on a Cross Gules an Arrow in pale, the point uppermost, of the field, sur­ mounted of a Lion passant guardant Or, in the first quarter a Cow's head caboshed also Gules.
Crest: On a Wreath of the Colours, in front of a representation of Mount Gibraltar at Bowral proper, a pair of Dividers Or.
Supporters : On either side a Kookaburra proper.
Motto: 'Amoenitas Salubritas'.

The red cross of England is common in many arms in New South Wales, and here also recalls that the first buuter to be shipped to England was taken to the port of Sydney by rail from Bowral. The cow's head represents the dairying industry, while the arrow denotes the progress of the municipality, with the lion passant guardant defends that progress. The supporters are kookaburras, a well-liked native Australian bird.

The crest consists of a representation of Mount Gibraltar, which looms behind Bowral, and a pair of dividers, a reminder of John Oxley, surveyor-general of NSW, who founded the town on land granted him by the colonial government for his services.