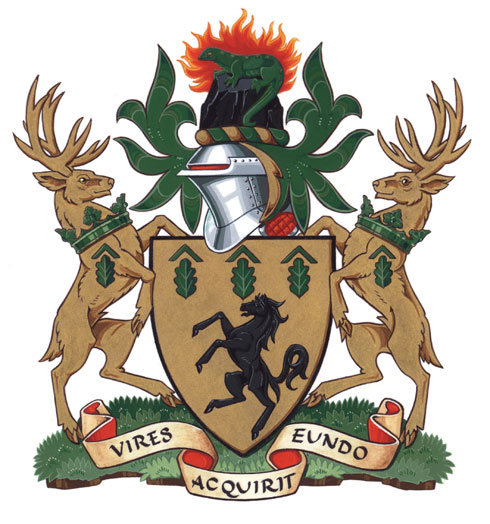 Arms: Or a horse forcene Sable in chief three oak leaves each ensigned by a chevron Vert;
Crest: On a rock Sable a salamander Vert enflamed proper;
Supporters: Two stags Or each gorged with a ducal coronet, charged on the shoulder with an oak leaf ensigned by a chevron, and standing on a grassy mount Vert;

The horse has been taken from the previous municipal emblem. The oak leaves are in honour of the Duke of Hamilton and Brandon who has an oak tree in one of his crests. Each oak leaf has a small chevron cap to represent the roofs of houses and the municipal identity of Brandon.

The crest is based on the other one of the Duke of Hamilton and Brandon, a salamander in its customary flames. Here, it is coloured green and lies on a rock. This combination alludes to the location of the city near the Assiniboine river, the name of which refers to the use of hot rocks for cooking.

The deer are local fauna referring to the antelopes that are supporters of the Duke of Hamilton and Brandon. The coronets allude to the dignity of a Duke and the oak leaf and chevron are taken from the arms design.

I also received the image below, which I presume is the town logo. 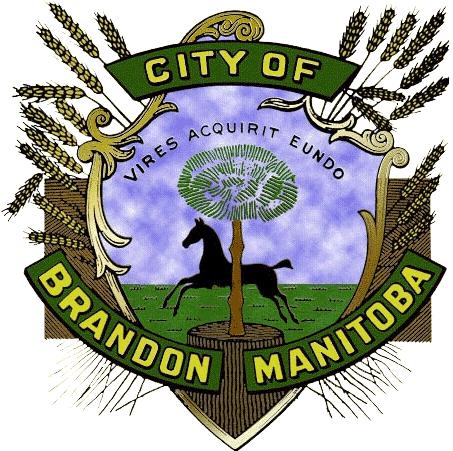