From Heraldry of the World
Your site history : Brentwood College Association
Jump to navigation Jump to search 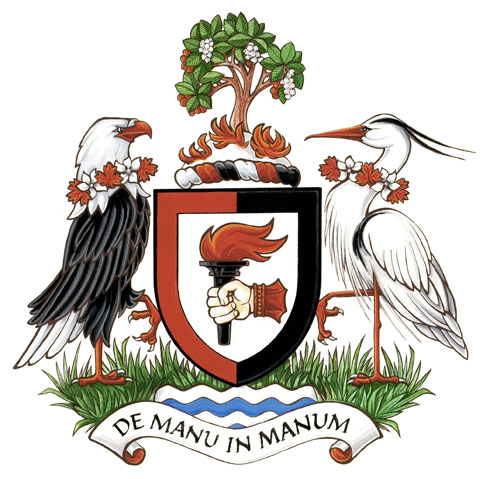 The arms were officially granted on November 15, 2006.

The hand holding the torch is modelled on the school’s traditional emblem referring the importance of striving for the best and excellence in achievement and emphasizing the link with the school’s traditions. The border, using two of the school’s colours, red, white and black, symbolizes its coeducational character and its original and present campuses.

The white mound set with a frieze of red flames is inspired by the original meaning of “Brent”, a piece of ground that had been cleared by fire. Rising out of this is an arbutus tree in blossom, symbolizing the tree of knowledge and also representing new life and new ideas.

The eagle is traditionally considered in heraldry as the king of birds or the monarch of the air, suggesting the school’s traditional focus on leadership. Complementing the eagle’s evident power, however, is the quieter fortitude and tenacity of the blue heron. As the eagle calls from the high cedars, the blue heron silently observes at the water’s edge. Creatures of strength, determination and grace in flight, both eagle and blue heron are fitting choices as supporters of a school striving for excellence. Although eagles and herons may preside over the bay, each continues to respect and live in harmony with the beauty of the natural environment of the oceanfront campus. Brentwood as a Canadian and British Columbian institution is signalled through the maple leaf/dogwood collars.

The motto "DE MANU IN MANUM" is the school’s traditional call to action. Translated as “From hand to hand”, the motto symbolizes the passing of the torch of learning and of leadership through service to others. It is also interpreted as the passing of Brentonian traditions and ideals from the original school, founded in 1923 at Brentwood Bay, to the new school re-established at Mill Bay in 1961.