From Heraldry of the World
Your site history : Brisbane
Jump to navigation Jump to search 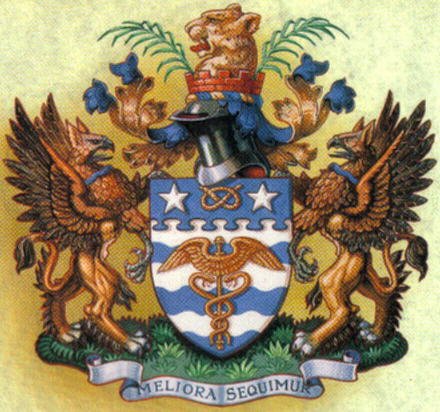 Arms : Barry wavy of six Argent and Azure, a Caduceus Or; on a Chief nebuly of the second a Stafford Knot of the third between two Mullets of the first.
Crest : On a Wreath Or and Azure. Out of a Mural Crown Gules, a Leopard's head couped Or between two Palm Branches slipped Vert.
Supporters: On either side a Gryphon proper charged on the neck with a Bar wavy Azure.
Motto: 'Meliora Sequimur'.

Brisbane's achievements in the field of astronomy are indicated by the two mullets, while the Stafford Knot is the badge of the 38th Foot Staffordshire Regiment) in which Sir Thomas Brisbane first entered the British Army as an Ensign in 1789. He had a highly distinguished military career serving under the Duke of Wellington in the Peninsular War where he fought with distinction, reaching the rank of General.

The Caduceus is the symbol of commerce and peace, and is the emblem depicted for Hermes (Mercury) in his capacity as God and Protector of commerce. This symbolises the everyday activities of the city and is an appropriate symbol for a city of status.

Two Gryphons support the design, together with the motto "Meliora Sequimur". The Gryphon was chosen becaus e it is spirited, animated, fantastic and vivacious. The wavy blue bar around the neck refers to the city as a port on the river. The palm leaves in the crest are a symbol of victory (included as a compliment from the Council to the valour of Australian Fighting Services). The leopard in the crest symbolises bold courage and patience. The colours of the city, blue and gold, are indicated by the wreath at the top.