From Heraldry of the World
Your site history : Burlington
Jump to navigation Jump to search 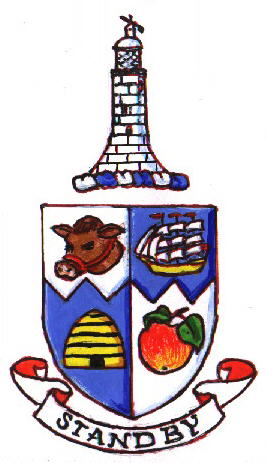 Burlington's Grant of Arms was due to the gift of Miss Dorothy Stone, to mark the town's new status of a city in 1974.

The original design had been created by Miss Arial Shaplan fifty years earlier and recast by Dr G. P. Gilmour. Lord Lyon and the Council negotiated several details of colours, the choice of the symbols in each quarter and the non-standard Scottish practice of civic arms having a crest rather than a mural crown above the shield.

The peaks of the dividing line represent the major local headlands of Rattlesnake Point, Mount Nemo and Flamborough Head. The heifer and the apple allude to the importance of agriculture and farming in Burlington's early growth. The sailing ship and lighthouse refer to Burlington's early years as an important lake port, while the beehive symbolizes the role of industry in the city's development.

The heifer's head also hints at the origins of the city's name. In Lincolnshire dialect the word "burl" is a term for heifer, while the collar resembles a bridle (one theory is that Burlington is a corruption of Bridlington a town in Yorkshire).

The motto is an old nautical term when the captain alerted his crew of potential danger.