From Heraldry of the World
Your site history : Campbelltown
Jump to navigation Jump to search 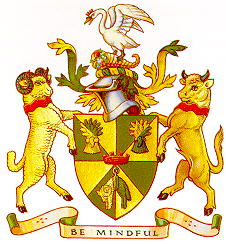 The arms were first used for the City of Campbelltown in 1969 and are a symbol of much of the City's past. It is based on the arms of the Campbell family of Airds, Scotland, after which Campbelltown was named.

At the centre is a shield, divided into eight and coloured gold and green. On it are two sheaves of wheat and a fleece. Both are reminders of the historic importance of wheat and sheep farming for Campbelltown and the link to James Ruse and John Macarthur. In the centre of the shield is a red crown in the form of a wall as a symbol of the authority and status of the Council.
A traditional helmet is placed above the shield and decorated with gold and green mantles on each side and a wreath on top.

The crest is a white swan similar to that used by the Campbell family. The swan wears a red crown and stands in a horn overflowing with fruit. This is a reminder of fruit farming at Ingleburn which was once a separate Municipality.

Supporting the shield on the left is a golden horned ram and on the right a golden bull. These are reminders of the importance of the wool and cattle industry and grazing to Campbelltown. Both animals are wearing a wavy red collar which represents Ingleburn (Ingle - fire; burn - a brook).

At the base, the Campbell motto "Be Mindful" appears on a gold and green scroll.