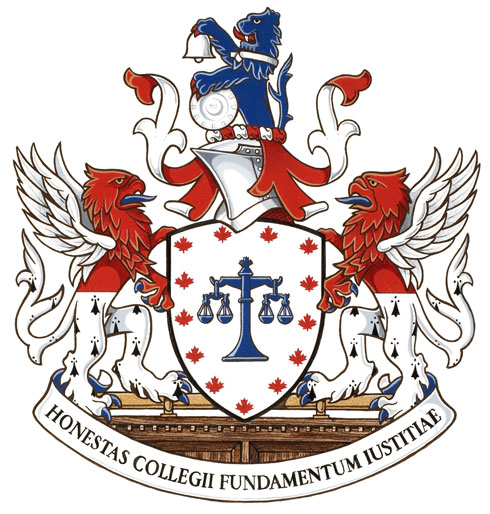 
Crest : A demi-lion Azure gorged with a wing collar holding in the dexter forepaw a bell the sinister forepaw resting on a bowl placed on its edge, all Argent
Supporters : Two griffins per fess Gules and Ermine winged Argent standing on a mahogany panel proper set with a bar Or
Motto: HONESTAS COLLEGII FUNDAMENTUM IUSTITIAE

The central device is a new invention in heraldry, the double ansul or double scales of justice to represent the two great legal traditions in Canada: the common law and the civil code. It is surrounded by maple leaves, one for each of the provincial and territorial components of the Association (in 1993 described as 12, in 2006 without number). The colours are red and white, the national colours of Canada, and the blue of the Association.

The crest combines a lion wearing a wing collar, a distinctive mark of the profession representing the majesty and strength of the law, with the silver bell and silver rosewater bowl, two historic emblems of the Association’s activities as a body corporate.

The traditional bar mounted on mahogany represents the main forum, the court, in which the practice of law unfolds, and is the support for the griffins, ancient symbols of justice and equity. The griffin repeats Canada’s national colours, which are also those of the ceremonial robes of the Justices of the Supreme Court. The historic links between the Court and the Association are celebrated with the addition of ermine.

The motto means “The integrity of the profession is the foundation of justice”. 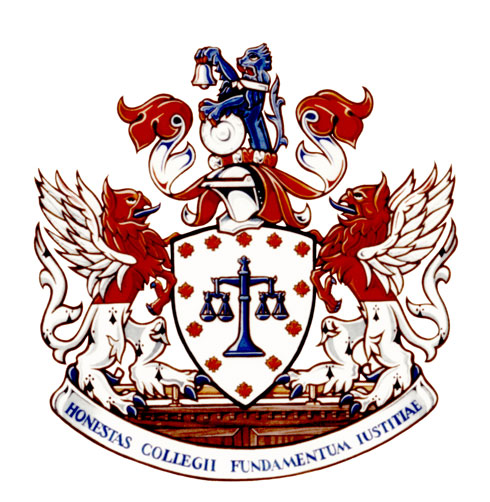