From Heraldry of the World
Your site history : Chartered Insurance Institute
Jump to navigation Jump to search 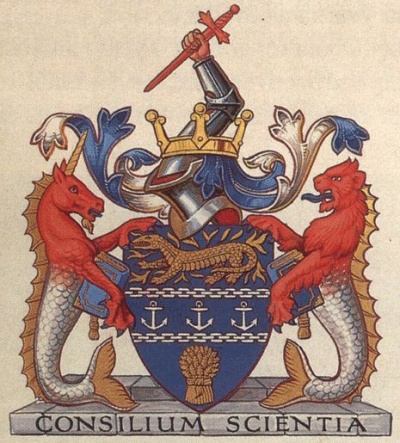 Arms: Azure, between two chains fessewise three anchors argent, in chief a salamander in flames and in base a garb Or.
Crest: Out of a Saxon crown Or, an arm embowed in armour proper, the hand also proper grasping by the blade a sword in bend sinister, point downwards, gules.
Supporters: On the dexter side a sea unicorn argent, the foreparts gules, armed, bearded and finned Or, and on the sinister side a sea lion also argent, the foreparts also gules, finned gold; each holding by the exterior leg a book, the spine turned outwards from the breast, azure, edged, garnished and with pendent marker also gold.
Motto: Consilium scientia

The arms were officially granted on September 25, 1933 in England and in 1959 in Scotland.

The salamander symbolises Fire Insurance. The Salamander is a fairly common charge in heraldry and is often shown as a dragon in flames of fire. In this case it is displayed without wings and follows the shape of a lizard. In the Middle Ages it was believed that the creature had the shape of a man and lived in fire. The Greek derivation means a man that lives in the chimney or fire.

The garb or sheaf of grain represents life assurance, and two chains, security against accidents. The anchors, standing for safety at sea, stress the marine interests.

The Motto "Wisdom and Knowledge" implies the importance of the Institute's educational activities. 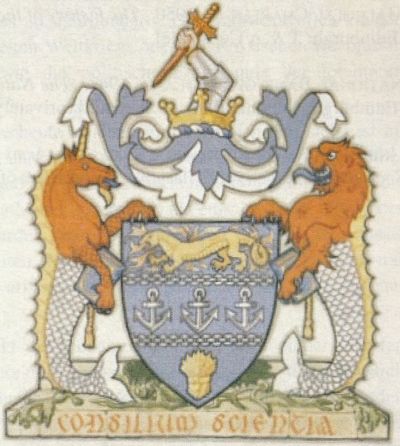