From Heraldry of the World
Your site history : Cheshire
Jump to navigation Jump to search 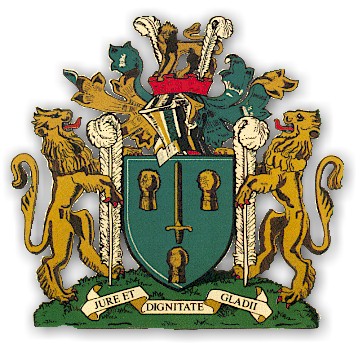 Arms : Azure a Sword erect between three Garbs Or.
Crest : Upon a Mural Crown Gules a Lion statant guardant Or between two Ostrich Feathers Argent.
Supporters : On either side a Lion Or supporting between the forelegs an Ostrich Feather Argent.
Motto: 'JURE ET DIGNITATE GLADII' - By the right and dignity of the Sword

The shield displays the trio of golden wheatsheaves on blue which have been associated with the Earldom of Chester since the late 12th century. The shield is the same as that known to have been used as the city arms of Chester in 1560 and which can be seen on the bridge at Eastgate, Chester. From 1779 this shield was occasionally used as the Chester Assay Office hallmark.

The crest is a royal lion between two ostrich feathers, referring to the Principality and Palatinate, upon a red mural crown alluding to Chester's sandstone walls. The feathers franking the shield are supported by gold lions derived from the arms of the third and fourth Earls of Chester.