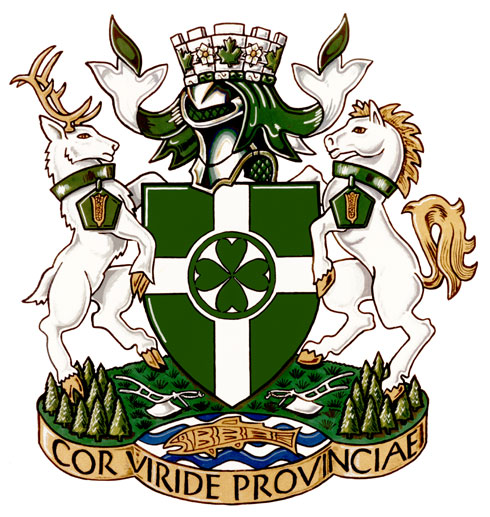 The core of the design is a new symbol in Canadian heraldry developed from the idea of "The Green Heart of British Columbia". The heart is shown four times, oriented to the four cardinal directions representing all the directions in the community. The hearts are framed in a green circle to underline the idea of Chilliwack being at the heart of things. The hearts are placed at the centre of two paths, giving rise to the second theme, Chilliwack as the crossroads of the Upper Fraser Valley.

The helmet and mantling, the decorative cloth in the City's colours of green and white (heraldic silver) are the two traditional components of this and most coats of arms. Today they can symbolize, in the same spirit as the knight defending his lands, the determination of citizens to safeguard and strengthen their community. Above the helmet and mantling is a special emblem, the mural coronet, often used in heraldry to represent municipal government. It carries a frieze of maple leaves and dog woods to represent a Canadian municipality in British Columbia.

The compartment on which the shield rests and the supporters stand represents symbolically, the farmlands, forested land and waters of the municipality. The First Peoples of the community are honoured through the golden salmon, rendered in Salish style. Agricultural pioneers and the agricultural industry are also highlighted through the two silver plows.

The supporter on the left side is a stag representing the rich wildlife to the City. On the right is a mare, symbol of the horsepower which was the motive force for all of Chilliwack's early agricultural development and other types of early transport and industry as well. Each supporter has a distinctive collar and pendant. The pentagon symbolizes the "five corners" of the original settlement while the corn represents all of the crops which make "The Green Heart of the Province" so well known.

The motto means "The Green Heart of the Province".