From Heraldry of the World
Your site history : Clarington
Jump to navigation Jump to search 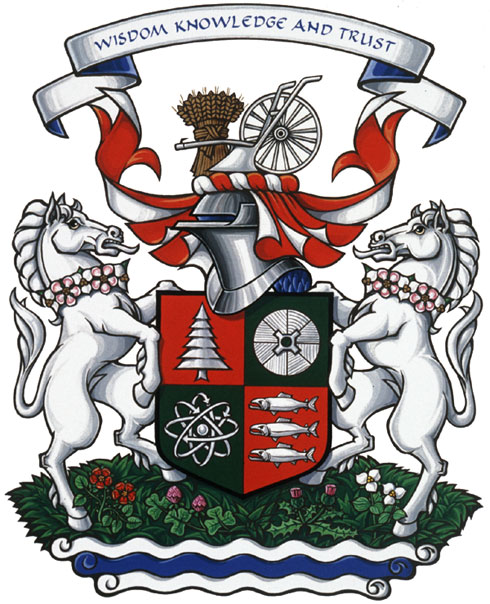 Crest: In front of a garb Or and a carriage wheel, a plough Argent;

Supporters: Two horses Argent, each gorged with a collar of trillium flowers and apple blossoms, standing on a grassy mound set with roses, thistles, shamrocks and trillium flowers proper rising from barry wavy Argent and Azure;

The tree represents the forests of the Pine Ridge region and the Orono tree nurseries. The lumber supply was a reason for the early settling of the Newcastle area. The millstone commemorates the gristmills built by the pioneers of the region. The salmon, which once appeared in great numbers in Lake Ontario and have been re-introduced in recent years, symbolize the area's wildlife heritage. The atomic energy symbol marks the importance of the Darlington nuclear generating station in the present Clarington economy.

The plough marks the importance of agriculture in the Clarington region, and several plough manufacturing firms were located in the area. The wheat sheaf, from the seal of the former Township of Darlington, also marks the agricultural origins of Clarington, and the carriage wheel refers to the auto industry, vital to the economy of Durham Region, which got its start with the McLaughlin Carriage Works at Enniskillen.

Horses have played an important role in the local economy from pioneer times, and show horses are still raised in the area. The collars they wear indicate the Province of Ontario and the Municipality of Clarington itself. The base on which they stand includes the floral emblems marking the early settlement of English, Scottish, and Irish people, with the provincial flower, the trillium, representing the original native settlement of Huron, Iroquois, and Mississauga people. At the bottom are waves indicative of Clarington's large shoreline on Lake Ontario.