From Heraldry of the World
Your site history : Coburg (Ontario)
Jump to navigation Jump to search 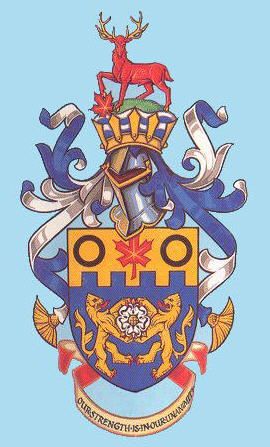 Cobourg started as a community in 1798 and in 1819 it was given the name "Cobourg" in honour of the marriages between the British Royal family and members of the house of Sachsen-Coburg-Gotha. The spelling Cobourg was probably a mistake but is has always been the way used for the town.

The white rose is taken from the badge of the house of Sachsen-Coburg-Gotha, but was no part of the arms of the Principality. The two lions are derived from the British arms. The chief is embattled to recall the towns military associations. Likewise the two black rings symbolise gun barrels. The Maple Leaf is the symbol of Canada.The special crown refers to the early settlement of Cobourg. The green hill and the water indicate the geographical position near Lake Ontario. The stag is taken from the arms of Ontario, the leaf from the Canadian arms.

Previously the town used other arms, which are shown below :