From Heraldry of the World
Your site history : Coquitlam
Jump to navigation Jump to search 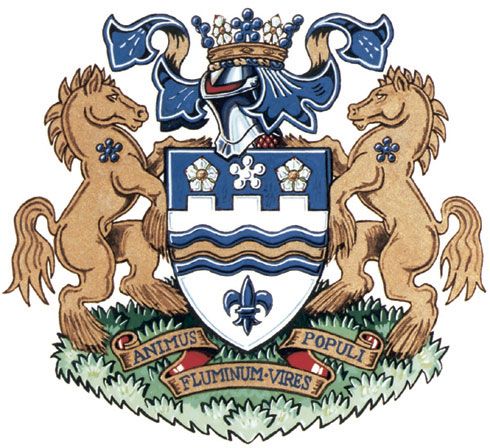 Arms: Argent, a fess wavy Azure thereon another wavy Or in base a fleur-de-lys Azure on a chief embattled Azure a fraise Argent between two dogwood flowers Argent seeded Or
Crest: A coronet Or the rim set with fraises Azure alternating with dogwood flowers Argent seeded Or
Supporters: On a grassy mound Vert two Clydesdale stallions Or charged on each shoulder with a fraise Azure
Motto: ANIMUS FLUMINUM VIRES POPULI

The arms were officially granted on August 20, 1990 to the District of Coquitlam and confirmed for the City of Coquitlam on April 15, 2005.