From Heraldry of the World
Your site history : Coulsdon and Purley
Jump to navigation Jump to search 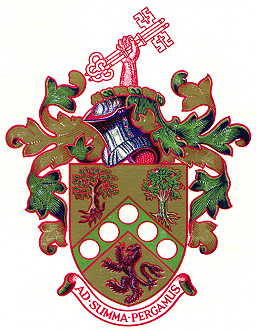 Arms: Or on a Chevron Vert between in chief an Oak tree and Beech Tree both fructed and eradicated proper and in base a Lion rampant Sable five Plates.
Crest: On a Wreath of the Colours a Cubit Arm proper in the hand addorsed two Keys in bend sinister the bows interlaced and wards uppermost Argent.
Motto: 'AD SUMMA PERGAMUS' - Let us press on to the highest.

The gold background is from the arms of Merton College, Oxford who have held the Manor of Farleigh since 1264. The green chevron refers to the green belt and its shape to the hilly nature of the district, in particular to 'Cuthraed's Dun or Hill' from which Coulsdon is named.

The five white roundels, representing pearls, refer to Purley, five in number for the main communities of Coulsdon, Kenley, Purley, Sanderstead and Selsdon. The black lion is from the arms of the Abbey and Convent of Hyde, which held the Manor of Sanderstead from circa 964 to 1538, and the trees refer to the area's wooded nature, with special reference to Purley Oaks and Purley Beeches.

The arm is from the crest of the Attwood or Atwood family, who were closely connected with the Manors of Coulsdon and Sanderstead. The keys are from the arms of the Benedictine Abbey of St. Peter and St. Paul, Chertsey holders of the Manor of Coulsdon from 727 to 1538.