From Heraldry of the World
Your site history : Dawson Creek
Jump to navigation Jump to search 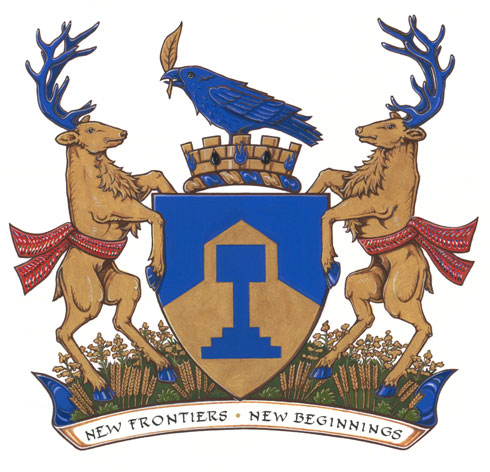 Arms: Per chevron rompu Azure and Or, in base the silhouette of the Alaska Highway Mile 0 sign Azure;
Crest: Issuant from a mural crown Or set with flames Azure and gouttes Sable, a raven close Azure holding in its beak an aspen leaf Or;
Supporters: Two elk Or attired and unguled Azure each girded of a Métis sash proper and standing on a grassy mount Vert set with goldenrod and wheat Or;
Motto : NEW FRONTIERS · NEW BEGINNINGS;

The arms were officially granted on November 20, 2008.

The design is based on the emblem of the city, which indicates the Alberta Pool grain elevator (one of several that once stood in the city) and the importance of agriculture in the City’s economy. The signpost is an important landmark in the City, and indicates the transformative effect that the Alaska Highway had on the city when it was built during the Second World War.

The mural crown indicates a municipal government. The raven is a local bird. The black drops and blue flames indicate the importance of the energy industries to the local economy. The aspen leaf is a symbol of forestry.

The elk are local animals. The wheat is a reference to local agriculture, and the goldenrod is the official floral emblem of the city.