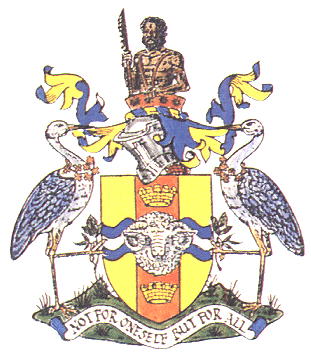 Arms : Or, on a Fess wavy Azure a Bar wavy Argent, over all a Pale Gules surmounted by a Merino Ram's head and neck caboshed proper between two Mural Crowns in pale Or.
Crest : On a Wreath of the Colours, out of a Circlet Gules charged with four Mullets of eight points Or, a demi figure of an Australian Aboriginal tribal Chief supporting in the dexter hand a barbed Spear proper.
Supporters : On either side an Australian Native Companion (Brolga) Bird, about the neck a Garland of Nardoo Grass, and holding in the interior claw a Fringe Violet (Thysanotus tuberosus) slipped and leaved, the whole upon a Compartment of Sand Hills and tufts of Grass all proper.
Motto: 'Not for Oneself, But for All'.

The gold of the shield represents the important arable areas of wheat, barley, rice and canola, while the Merino ram's head alludes to the importance of local wool production and sheep-shearing. Deniliquin was established at a crossing point over the Edward River, represented by the red pale interssecting the wavy fess. The two mural crowns recall the former separate townships of North and South Deniliquin.

The Aboriginal in the crest is the tribal chief Denilakoon after whom the town was named. He emerges from a circlet of four gold stars found on the State Arms of NSW. Supporters are two brolgas, with a necklet od nardoo grass, and holding a fringe violet, all of which are native to the area, depicted as a sandy compartment.