From Heraldry of the World
Your site history : Destroyer USS Arleigh Burke
Jump to navigation Jump to search 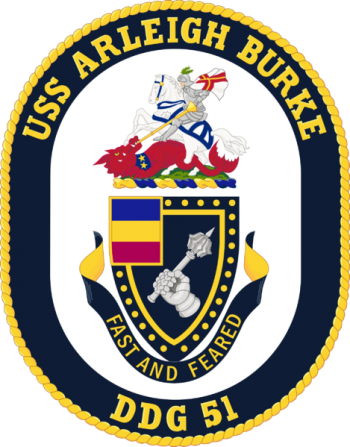 SHIELD: Azure, within an orle or bordured of bezants, 23 visible, an armored fist wielding a mace, both Argent, and a canton of three bars, Azure Or and Gules, fimbriated Or.

CREST: On a wreath of the colors, Or and Azure, on a grassy knoll St. George in full armor Proper, a birch sprig on his helmet, with mantling Argent charged with a cross or upon the cross of St. George and mounted on a war horse Argent, harnessed Azure, spearing with a golden lance a sea dragon Gules gorged with a collar Azure bearing two Gold mullets, and the number 31 appearing on a harness ornament.

MOTTO: On a scroll Azure doubled Or the motto “FAST AND FEARED” in Gold letters.

SEAL: The coat of arms emblazoned upon a white oval enclosed within a blue collar edged on the outer edge with a gold rope and inscribed with the words “USS ARLEIGH BURKE” at the top and “ DDG 51” in base all in gold letters.

SHIELD: Blue and gold represent the Navy. The orle, symbol of distinction, stands for the outstanding achievements in battle of Admiral Burke against the naval power of Japan, a formidable foe.The fist and mace symbolize the offensive and defensive power of the new destroyer. The mace, also a symbol of authority, represents Admiral Burke’s outstanding service as Chief of Naval Operations. It also refers to Admiral Marc Mitscher, an influential figure and mentor, for whom Admiral Burke served as Chief of Staff.Admiral Burke’s Destroyer Squadron 23, represented by the bordure of 23 bezants, was the only United States Destroyer Squadron awarded a Presidential Unit Citation signified by the canton of blue, yellow, and red. The bezants also refer to the year 1923 in which Arleigh Burke was graduated from the United States Naval Academy at Annapolis. Twenty-three also reflects Admiral Burke’s distinguished service on the staff of the Chief of Naval Operations as OP-23. CREST: The mounted figure of St. George recalls Admiral Burke’s celebrated victory in the Battle of Cape St. George over Japanese naval forces. His mantle bears a gold cross for the Navy Cross awarded to the Admiral. The birth branch on the helmet represents Admiral Burke himself, a reference to his name derived from the Scandinavian patronym Bjorkegren. The red sea dragon symbolizes Japanese naval power assaulted by the forces under Commander Burke’s command. It is gorged with the two gold stars he was awarded for outstanding service. The lance implaling the dragon signifies ordnance on target. The capabilities of the new destroyer , the most powerful and survivable ever built, are signified by the full armor and equipment of the warrior St. George. The Admiral ‘s nickname “31-knot Burke” is recalled by the number 31 on the horse’s harness.