From Heraldry of the World
Your site history : Destroyer USS Preble
Jump to navigation Jump to search 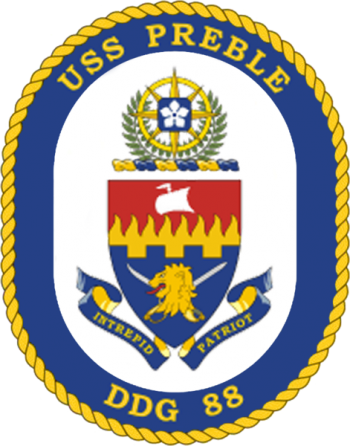 Shield: Per fess embattled Or and Azure (Dark Blue) a chief rayonny Gules charged with a ship’s topsail, crow’s nest and pennant Argent; in base the head of a lion erased Or, langued and armed of the third surmounting a naval officer’s sword and antique cutlass hilts to base saltirewise Proper.
Crest: On a wreath Or and Azure (Dark Blue) a laurel wreath Proper surmounted by a stylized compass rose of the first, thereon an Aegis radar escutcheon of the second charged with a cinquefoil pierced Argent.
Motto: A scroll Azure fimbriated and inscribed “INTREPID PATRIOT” Or.
Seal: The coat of arms in full color as in the blazon all upon a white background and enclosed within a dark blue oval border edged on the outside with gold rope and bearing the name “USS Preble” at top and “DDG 88” in base in gold letters.

Shield: Gold and dark blue are the traditional colors associated with the Navy. Commodore Preble’s attack and bombardment of the harbor at Tripoli in 1803 during his campaign against Barbary pirates is recalled by the embattlement and rayonny scarlet chief representing the fire and destruction he rained on the port. Scarlet symbolizes courage and Commodore Preble’s fiery resolve and determination to end attacks upon American trading vessels in the region. The ship’s sail further recalls his successful attack and blockade of Tripoli and refers to his other distinguished U.S. Navy commands, particularly of the USS Constitution and the frigate Essex. The head of the lion is derived from the Preble family coat of arms and symbolizes courage and strength. The crossed cutlass and sword represent combat and the readiness, past and present, to defend United States interests. Argent, or silver, signifies integrity, gold denotes excellence.

Crest: The eight battle stars earned by USS Preble (DD 345) for World War II service are recalled by the points of the compass rose and by the laurel wreath, which signifies honor. The compass rose indicates worldwide capabilities and service of the new Preble and it’s predecessors. The blue escutcheon, in the shape of the radar cover panel used on Aegis vessels, represents the advanced technology and weapons systems of the new ship. It is charged with a cinquefoil, recalling the five previous ships to honorably bear the name Preble. Argent, or silver, denotes integrity and valor, gold signifies excellence

Literature: Image from Wikimedia Commons. Information from The Institute of Heradlry, US Army.