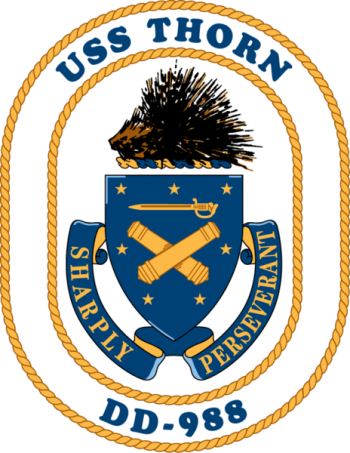 The Two Cannons symbolises the Battles of the Tripolitan War and that of the previous USS Thorn (DD-647) during World War II. The Sword, alludes to the one presented by the US Congress to Midshipman Thorn, for his exploits during the Tripolitan War, The Stars refer to the Seven Battle Stars awarded to the previous USS Thorn for World War II. The Porcupine represent a creature well able to defend itself against attacks by the use of its quills. thus symbolising the capabilities of the Ship.