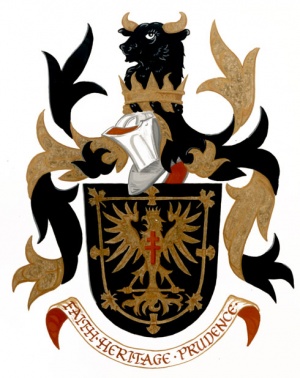 Arms : Sable an eagle displayed crowned with a crown rayonné Or charged on the breast with a cross of Lorraine Gules holding between the talons a conductor's baton fesswise all within a tressure bearing maple leaves and garbs alternately Or
Crest : Rising out of a crown rayonné Or the head of a bull Sable armed Or
Motto: FAITH • HERITAGE • PRUDENCE

The eagle and the black and gold colours allude to the Germanic origin of the Dietrich family. The cross of Lorraine alludes to the origins of the family in Lorraine and to the fact that the Dietrichs are predominantly Christian in religion. The baton alludes to the baton used by the conductor of an orchestra or a wand used by a magician, and hence is a reference both to music and the arts and to leadership. The border of maple leaves and wheat sheaves indicates that the Dietrich Family Association exists in Canada and that a great many members of the family are either involved in farming or descend from farming families.

The bull head suggests strength, determination, steadiness and hard work. Taken together, the bull’s head and the eagle provide very powerful symbols and suggest the strength of the family and the family bonds. The crown with the flame points is a reference to the fact that a number of Dietrich coats of arms feature the sun as a prominent charge.