From Heraldry of the World
Your site history : Diocese of Amarillo
Jump to navigation Jump to search 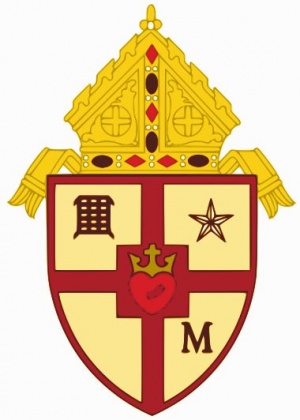 The arms of the Diocese of Amarillo are gold to reflect the fact that the name of the See city is the Spanish word for the color “yellow”, Amarillo. The cross is of course a typical Christian symbol. The cross is red to honor the Spanish explorers who first settled the area that is now the Amarillo diocese.

The Diocese has had three different arms in the course of time. 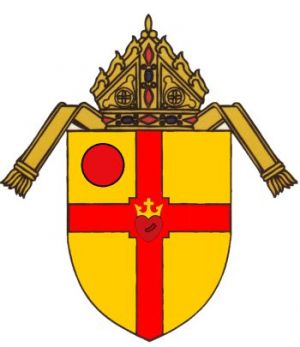 In the center of the cross is the heraldic symbol of the Sacred Heart of Jesus in gold, titular patron of the Cathedral church at the time. In the upper left corner of the shield is a red sphere, or roundrel, derived from the coat of arms of His Holiness Pope Pius XI, who established the diocese in 1926.

In 1980 the arms were changed, as the patron saint of the Diocese changed to St. Lawrence. 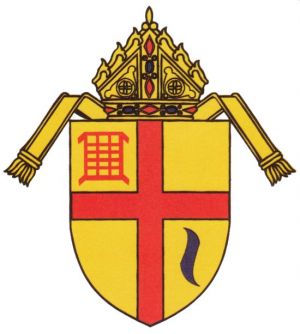 The roundel and the heart were replaced by the Grill of St. Lawrence and a blue flame which reflects the natural gas and oil that underlies the economy of the Texas Panhandle.

The current arms were adopted in 2011 after the third change of thepatron saint. The grill and heart of the two previous patron saints were restored, and a star of St. Mary, the new patron saint, has been added in the second quarter. The arms thus refelct the history of the cathedral. The flame has been replaced by the letter M, also for St. Mary.

Literature : Image from Wikipedia by Alekjds