From Heraldry of the World
Your site history : Diocese of Dodge City
Jump to navigation Jump to search 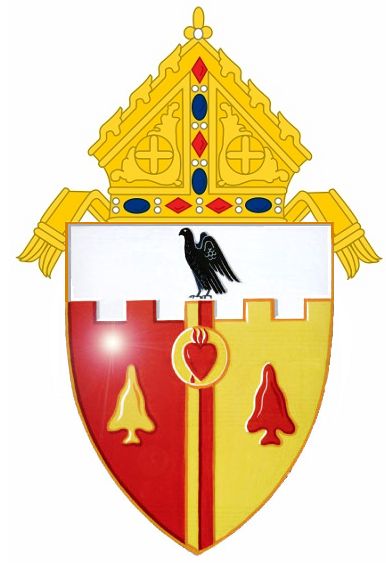 Red and gold refer as Spanish colors to Francisco Vasques de Coronado, the explorer and Fray Juan de Padilla, the 16th century missionary who ministered in the territory that is now the diocese of Dodge City.

The pale dividing the field, refers to the 100th meridian which runs through Dodge City. The bar is divided again to indicate that the division of Central and Mountain Time Zones which also runs through the diocese.

At the honor point of this section a golden circle is placed with the symbol of the Sacred Heart commemorating the first cathedral of the diocese. This medaillion is created in gold, signifying the divinity of Christ, and of red, the color of his humanity.

On either side of the pale are two Indian arrowheads. They represent the Native American heritage of the diocese of Dodge City and the Diocese of Wichita from which the diocese Dodge City was formed in 1951.

The embattled chief symbolises the fortifications which marked Dodge City as a frontier town. The hawk represents the Black Hawk Indian War in which colonel Henry Dodge took part.

Literature : part of the explanation of the arms of bishop Brungardt on the diocesan website d.d. 15-6-2011