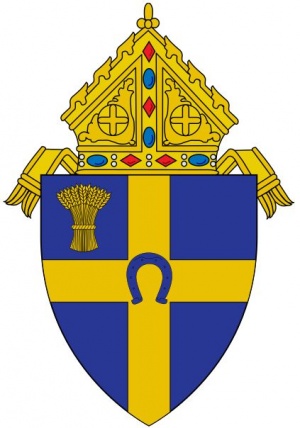 The colors of the cross are traditionally attributes of the Virgin Mary, who is invoked as a patron of the Fargo diocese under her title ¨Immaculate Conception.

In the centre of the cross is a horseshoe, alluding to William Fargo (1818-1881), the namesake of the See city and co-founder of Wells Fargo & Co, whose stagecoaches carried express mail, bank funds and settlers through the Midwest.

The wheatsheaf recalls that wheat is the most important agricultural product of North Dakota, as well as the bread that becomes the Body of Christ in the Eucharist.

Literature : from the explanation of the arms of John T. Folda