From Heraldry of the World
Your site history : Diocese of Rochester (USA)
Jump to navigation Jump to search 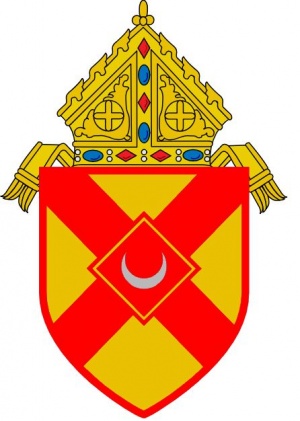 The diocesan shield was designed in the 1930’s by Mr. Pierre de Chaignon LaRose.

The red saltire, the Cross of Saint Andrew, was taken from the arms of the (Anglican) Diocese of Rochester in England, of which Saint Andrew was the principal Patron. It was in the See of Rochester, England, where the saintly Bishop, and later Cardinal, John Fisher faithfully exercised his episcopal ministry, unto the shedding of his own blood in martyrdom. In honor of Saint John Fisher’s fidelity, he became the patron of the Diocese of Rochester, New York. The rose in the English arms is replaced by a crescent, a symbol of the Blessed Virgin Mary, patroness of the United States of America, under her title of the Immaculate Conception.

The color red is the color of love and of blood, and is therefore representative of the Martyrdom of Saint Andrew, the first-called by Jesus Christ among the holy Apostles, and of Saint John Fisher, both of whom heroically held to the truth and authentically handed on the Catholic and Apostolic Faith as preachers, pastors, and constant intercessors before the throne of the Triune God. Gold is the symbol of the primary virtue of Faith, which enabled Saint Andrew and Saint John Fisher to believe all that God revealed through His Holy Church – and the ultimate commitment of their belief in the Son of God.