From Heraldry of the World
Your site history : Diocese of San Bernardino
Jump to navigation Jump to search 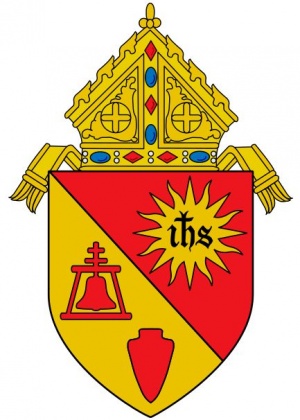 The division per bend symbolizes the Riverside and San Bernardino counties. Red and gold are the Spanish colors, for the heritage of the area and to honor those who settled in Californis. The sunburst gold/red represents Saint-Bernardine of Siena, patron of the diocese, who traditionally tells us, was the first to employ the monogram of the Holy Name, which is usually displayed on a sunburst, to promote the public devotion of the Holy Name of Jesus.

The lower half shows symbols for the territory of the diocese. The arrowhead is symbol of the San Bernardino Valley and the Raincross has come to be known as the symbol of Riverside.