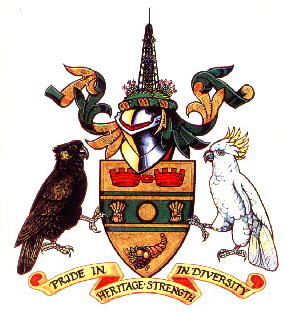 Two mural crowns, symbols of local government, represent by the links of chain, the unity of Doncaster and Tempelstowe. The cotised Fess alludes to the tramline linking Box Hill with Doncaster Tower, the first electric tramway in Australia. The gold bezant marks the first gold discovery in Victoria at Warrandyte, while the sheaves signify the growing of wheat at Tempelstowe, and the first export of the grain to England. The horn of plenty refers to the orchard industry for which the district was well known.

The Doncaster Tower, a former prominent landmark, features in the crest, with sprigs of the State's floral symbol, pink heath, at its base.

The two supporters, indigenous black and white cockatoos, were primary totem symbols in Aboriginal society, representing the division of all things into complementary opposites.