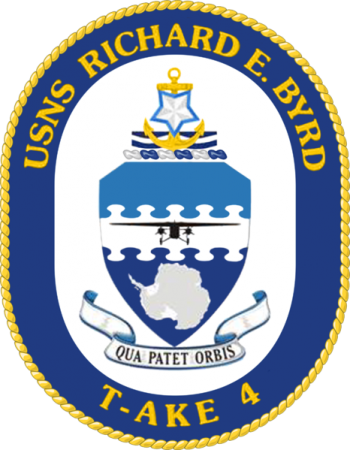 Shield: Per fess Celeste and Azure (Dark Blue), on a fess nebuly Argent a trimotor plane in silhouette Sable, in base a stylized landmass Gris garnished of the third.
Crest: From a wreath Argent and Celeste, in front of a billet fesswise barry and wavy Azure (Dark Blue) and of the first, an anchor Or bearing a mullet inverted of the first fimbriated of the second.
Motto: A scroll Argent edged and doubled Celeste inscribed ‘QUA PATET ORBIS’ (Translation ‘as far as the world extends’), Sable.
Seal: The coat of arms as blazoned in full color on a White field enclosed by a Blue oval border edged on the outside with Gold rope and bearing the name ‘USNS RICHARD E.BYRD’ at top and ‘T-AKE 4’ in base all in Gold.

Dark Blue and Gold are the colors traditionally associated with the Navy. Rear Admiral Byrd’s area of exploration, illustrated by the following images: the Lighter Blue denotes the geographic position of the North Pole, in the middle of the Arctic Ocean; the Dark Blue with the stylized landmass alludes to Antarctica located over the South Pole. The nebuly, the heraldic symbol for the sky, indicates RADM Byrd’s military career as an aviator. The silhouette of the trimotor plane symbolizes the aircraft piloted by the RADM over both regions, becoming the first person to fly over the South Pole and to attempt to fly to the North Pole. His accomplishments, further conveyed in the ship’s motto ‘QUA PATET ORBIS’, highlights his exploration of both poles or ‘as far as the world extends’. Crest: The billet and the wavys suggest the USNS Richard E. Byrd’s transport and delivery capabilities. The anchor symbolizes the T-AKE 4 strength at sea and steadfastness. The inverted star commemorates the Rear Admiral’s award of the Medal of Honor for his travel to the North Pole.