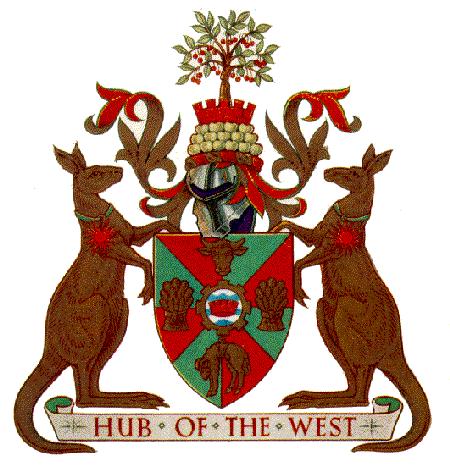 The shield expresses pictorially the city's slogan "The Hub of the West". It is divided by eight radiating lines, representing the junction of the Newell and Mitchell Highways, together with the north-south and east-west railway systems. The red segments refer to the meaning of the name Dubbo as 'red earth', while the green stands for the pastoral and agricultural areas served by the city. The sheaves of wheat, bull's head and fleece refer to traditional activities in the area, while the cog-wheel represents the city's modern engineering and allied industries. In the centre, or 'hub', is a red mural crown for the city, on a roundel representing the Macquarie River.

Two men who did much to establish the town are honoured in the crest. Robert Dulhunty, who first settled the district, was famous for his apple pie, hence the pile of apples. The first store was built by a Frenchman, Jean-Emile Serisier, whose name sounds like 'cerisier', French word for cherry tree. Dulhunty's expedition survived on kangaroo stew, though most have been driven west by closer settlement. Hence the gold kangaroo supporters are differenced from the one on the state Arms by the western sun.