From Heraldry of the World
Your site history : Dudelange
Jump to navigation Jump to search 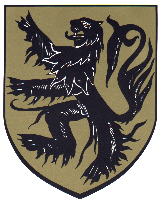 The original arms of the Lords of Dudelange was a red lion, crowned of gold, on a silver field. This lion may have been derived from the lion of Luxembourg, but that is not sure. For some reason the town asked for the arms in the present colours. Initially the lion was also crowned black, but as a black crown is not logical and the town did not use the crown anyway, the crown disappeared.