From Heraldry of the World
Your site history : Ebstorf
Jump to navigation Jump to search 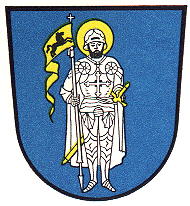 The arms show St. Mauritius, shown as a knight. St. Mauritius was the patron saint of the local Abbey, founded in 1150 by Volrad of Bolwede. The Abbey played a major role in the development of the town.

The horse on the banner is the horse used by the Kings of Hannover, as the area historically belonged to the Kingdom of Hannover.In the original design the arms showed the saint as a black person, as he was. However, in 1934 a black face was not acceptable in Nazi Germany and Ebstorf thus has the only white-faced St. Mauritius !