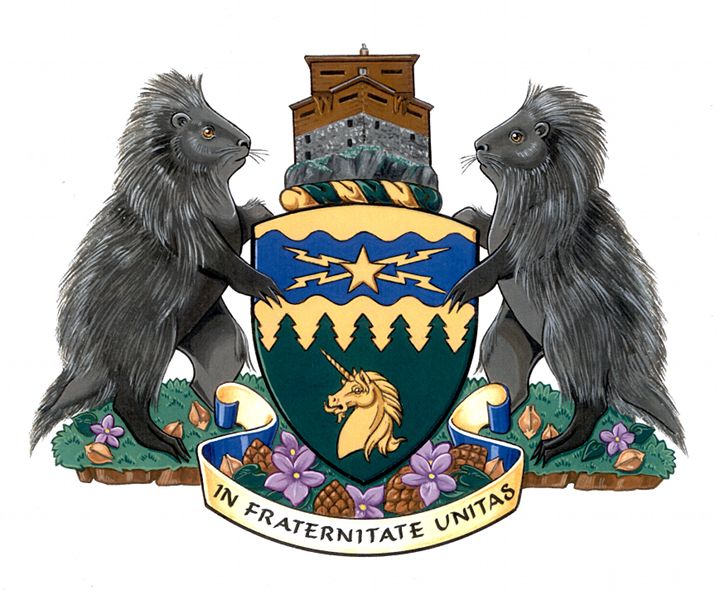 The division line and the colours refer to the importance of agriculture and forestry for the Madawaska region, of which the city is the main centre. The wavy bar symbolises the Saint-jean and the madawaska rivers in the municipality. The lightning bolts refer to the hydro-electric power which is generated by the rivers. The star is the symbol of hope, the Stella Maris, which already was part of the symbols of the Acadie colony ini New France, adopted in 1884.
The unicorn head is taken from the arms of Sir Edmund Walker Head (1805-1868), governor of New Brunswick (1848-1854), who gave his name to the village of P'tit-sault, and named it Edmundston.

The crest shows the local fortress of P'tit-Sault, built in 1841 on a promontory overlooking the junction of the Saint John and Madawaska rivers at the height of the Aroostook War between the United States and Great Britain. It was part of a line of defence stretching from Saint John to Rivière-du-Loup, Quebec. Destroyed by a lightning strike in 1855, it was accurately reconstructed in 2000, thanks to the generosity of the community, and in a sense it crowns the city.

The motto means 'Unity in Brotherhood' and was the motto of the former municipality of Saint-Jacques.

The porcupine supporters are canting for the translation of the Maliseet word Madawaska as Land of the Porcupines. Porcupines also featured in the arms of the former municipalities of Edmundston, Verret and Saint-Basile.

The compartment shows buckwheat grains, a main local crop used in several regional specialities. It was also part of the arms of saint-Basile. The violets are the provincial flower of New Brunswick and wer part of the arms of Verret and Saint-Jacques. Finally the pine cones are taken from the old arms of Edmundston and Verret and symbolise the pine forests. They also are the symbol of the US State of Maine (The Pine Tree State) and reflect the good relations with this neighbouring state.

Literature : Image and information from http://www.edmundston.ca