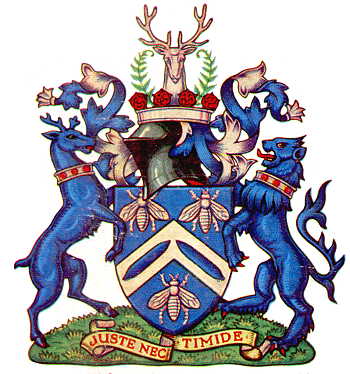 Arms : Azure on a Chevron between three Hornets volant Or two Cotton Cops of the field.
Crest : Issuant from a Coronet composed of six Roses Gules set upon a Rim Or a Stag's Head affrontée of the last between two Branches of Fern proper.
Supporters : On the dexter side a Stag and on the sinister side a Lion Azure each gorged with a Collar Or charged with three Roses Gules.
Motto: 'JUSTE NEC TIMIDE' - Be just and fear not

The hornets, nature's paper-makers, and the cotton cops are indicative of the Borough's industries.

The stag's head is the crest of the Hulton family, and was formerly used by the Farnworth UDC. The ferns are a reference to the name of the Borough - ' the settlement among the ferns'.

The Hulton arms include a lion, and this gives the sinister supporter, while their stag's head crest provides the other. Although the blazon does not say so, the stag is shown without his head of antlers, as a symbol of the community's banding together, for the stag relinquishes his antlers when living in an organized herd.