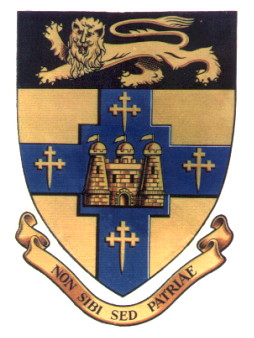 Arms : Or on a Cross quadrate Azure a Castle of three domed towers on each a Pennon flying to the dexter between four Cross crosslets fitchy Gold on a Chief Sable a Lion passant guardant of the field.
Motto: 'NON SIBI SED PATRIAE'-Not for oneself but for one's country

The predominant colours of blue and gold, are those of the great de Warrenne family of Castleacre. The cross recalls the numerous religious houses of the district which played a great part in its early history. The castle is from the old seal of the former Borough of Castle Rising, and the crosslets are from the arms of Castleacre Priory and of the Howards, Dukes of Norfolk. The black chief is for the Black Prince, and the Royal lion, a special mark of favour, refers to the presence of Sandringham House within the bounds of the district.