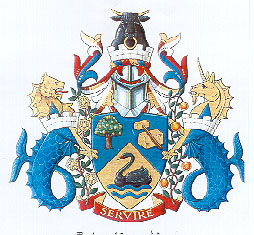 The Orange tree symbolises the local fruit growing industries, the hammer and rock the quarry industry, and the Black Swan Western Australia.
The two rivers represent the Canning and Southern Rivers which flow through the CityThe Bull's Head at the top of the crest comes from the crest of the original Gosnells family. The Knights helmet symbolises "Gentleman".

The Sea Lion and Sea Unicorn supporters represent the flow of migrants from overseas to Australia. Each supporter has a mural crown, indicating that Gosnells is an old established corporation whilst the rose branch held by the Sea Lion refers to Great Britain as the homeland of the forbearers of many inhabitants of Gosnells.