Difference between revisions of "Gower"

From Heraldry of the World
Your site history : Gower
Jump to navigation Jump to search 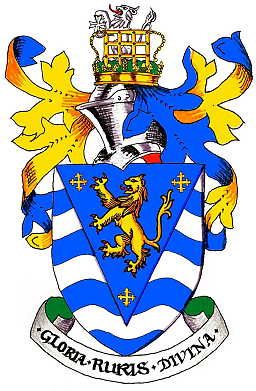 Arms: Barry wavy of eight Argent and Azure on a Pile Azure a Lion rampant between three Cross Crosslets Or.
Crest: Out of a Coronet composed of four ears of Wheat and as many Acorns leaved set upon a Rim Or a Munt of Heath proper thereon in front of a Lion holding between the fore-paws a Maltese Cross Argent a Portcullis chained Gold nailed Azure; Mantled Azure doubled Or.
Motto : 'GLORIA RURIS DIVINA' - The glory of the countryside is divine.

The eight alternate white and blue wavy horizontal bands with a blue triangle pointing downward from the top, represent the peninsula surrounded by sea. The both the gold rampant lion and the three gold cross crosslets appear in the arms of the ancient Lords of Gower, the de Breos family and the Earls of Warwick. The crosses represent the Earls of Warwick, and the crosses and lion the de Breos family.

The golden coronet, with four ears of corn and four acorns symbolises the importance of agriculture and woodland, and to remind us that Gower is designated an area of outstanding natural beauty. The "mount of heath", is a pun on the name of Mrs Winifred Heath, who donated the Grant of Arms to the Council. The gold portcullis is an emblem of the Dukes of Beaufort, the most recent Lords of Gower.

The white lion is an emblem both of the Mowbray and Herbert families, both Lords of Gower, and the Maltese cross reminds us of the link with the Knights Hospitallers who held the manors of Berry and Millwood in Gower.