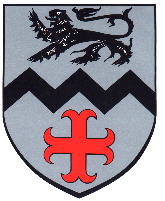 The cross in the lower part of the arms is derived from the arms of the Larochette family, who were for a long time Lords of Heffingen.