From Heraldry of the World
Your site history : Heidelberg (Victoria)
Jump to navigation Jump to search 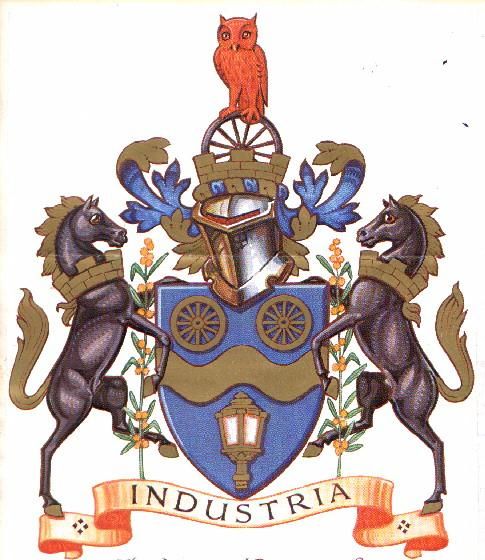 Arms: Azure, a Fess Wavy between in chief two Wheels and in base a Carriage Lamp Or, glazed proper.
Crest: On a Wreath of the Colours issuant from a Mural Crown Or a Wheel Sable perched thereon an Owl dose and affronty Gules.

The carriage wheels and the lamp commemorate the early beginnings of City about 1840, when the Heidelberg Road Trust was the local authority. The wavy line and the wattle blossom symbolize the Yarra River, while the horses allude to the customary mode of transport in the 19th century.

The mural crowns signify local government, with Heidelberg having the first form of suburban government in the Colony of Victoria.

The owl, a symbol of wisdom, honours the university city of Heidelberg on the Rhine in Germany, after which the district was named, due to similarity of landscape. The motto was first used in an early seal by the City.