From Heraldry of the World
Your site history : Institute of Wastes Management
Jump to navigation Jump to search 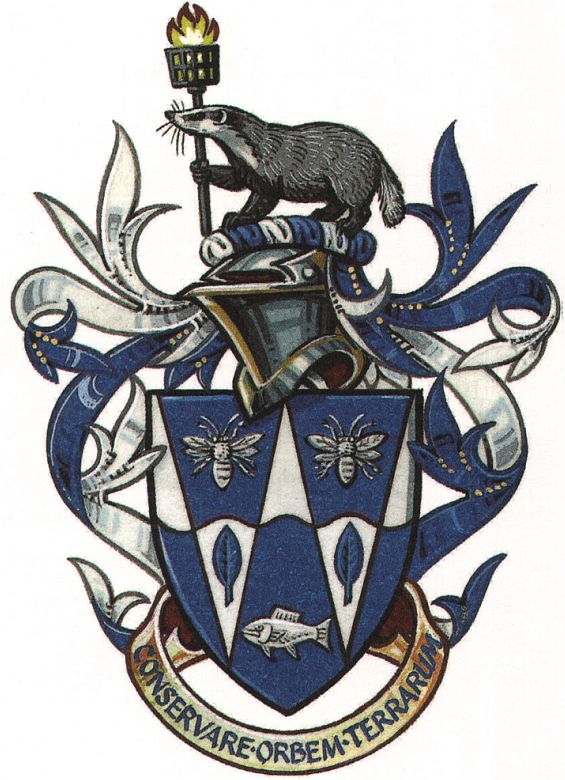 In the shield there are figures representing the three media of the environment i.e the bee flies in the air, the leaf comes from something growing in the earth and the fish swims in the water. This links back to the Institute's earlier logo where the same elements were also represented by a bird, plant growth, a fish and man. The bees provide a link to the founding meeting of the Institute held in Manchester in 1898, as there are bees on the armorial bearings of Manchester.

The letter W (for Waste etc.) can be seen in the pattern of the shield, and the two v shapes which make up the W can be taken to represent trenches or excavations which have provided man with a means of disposing of his wastes since the beginning of history.

The wavy horizontal line across the middle of the shield also represent water. The blue colour has been the Institute's corporate "house colour" for many years.

The badger is an animal which traditionally clears out its home or "hole" and removes its domestic refuse outside - usually for disposal by other animals. The badger is holding a cresset in which the flame represent controlled thermal treatment (or incineration) an increasingly important way of dealing with waste particularly when associated with heat recovery for use in distinct heating schemes or power generation.

The motto 'Conservare orbem terrarum' can be loosley translated as Preserving the Environment.