From Heraldry of the World
Your site history : Jerilderie
Jump to navigation Jump to search 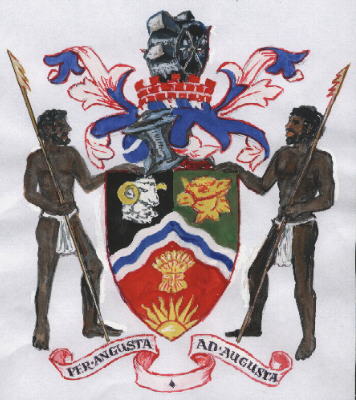 The name of this small town and shire in the dry plains of the west of the state, means 'with reeds' in the language of the Wiradhuri Aboriginal people, commemorated by the two men armed with spears.
The colours of the shield represent the rich soils of the area, which, thanks to irrigation, produce rice and other grains, stud Merino sheep and dairy cattle.

The wavy chevron alludes to Billabong Creek, source of life to the shire and to the Mulwala irrigation channel, drawing water from the Murray River to the south. This indebtedness to irrigation is marked by the crest of the wheel used to measure the quantity of water drawn by farmers for irrigation.

The mural crown is a symbol of local government authority and the motto, which means "from difficulties to honour" recalls the struggle of pioneers to survive prior to irrigation.