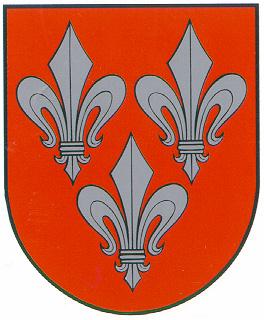 The arms is most likely related to Jonas Sapiega, the chancellor of Lithuania, who got the town rights for Jurbarkas from King Sigismund Vasa. Three fleur-de-lys are the apocryphal first arms of the princely Sapiega house.

Revoked in 1776, self-restored in 1791 with a mistake: the two fleur-de-lys changed to a double fleur-de-lys, regranted in 1792 with one more mistake: one over two.

In the early 20th century a variant with fleur-de-lys but one over two was used. Regranted in 1970 with the same mistake, and banned in the same year and finally regranted in 1993.