From Heraldry of the World
Your site history : Kamloops
Jump to navigation Jump to search 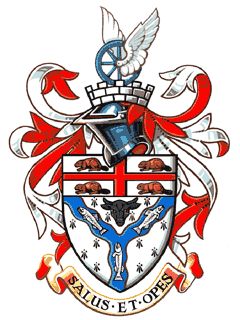 The elements of the arms represent the history and geography of Kamloops. The ermine shield represents the fur trade carried on between the white men and the Indians in the early days. The chief shows the arms of the Hudson's Bay Company, as the city developed from a Hudson Bay Company trading post.. The black bull's head conveys the fact that Kamloops was the centre of the cattle trade in British Columbia. The pallium symbolises that in Kamloops the North and South Thompson Rivers meet and from this central point continue on towards the open sea as one. The rivers show three mountain trout, all swimming upstream to indicate the flow of the waters.

The crest shows an engine wheel from the hub of either side is mounted a silver wing. This is designed to represent civic authority, the important junctional point of the railways, airways and highways in Kamloops, and progress denoted by the wings.

Literature : Image and info from http://www.city.kamloops.bc.ca